Today, Mototok is a pioneer and a reputable manufacturer in our industry. With avant-garde thinking, diligence and passion the people behind this company have created a product that introduces the future of GSE worldwide. But who are they? And how did it all get started? A look into the past.

Mototok is no faceless corporation. It is the passion, the belief and the lifeblood of its owners: Kersten Eckert (left) and Thilo Wiers-Keiser (right). Their synergy is what makes Mototok the unique company that it is. And it all probably wouldn’t have started if it wasn’t for a Cirrus SR20...

A man and his love for aviation

New millennium, new plane. That’s probably what hobby pilot Kersten Eckert was thinking when he bought his Cirrus SR20 in 2000. Back then, it was the aircraft of his dreams. The catch: The delivery period was approximately seven years. But he got lucky. There was this small ad, someone wanted to sell his SR20 – and Eckert instantly went for it. It made him the proudest pilot at his hangar.

But the euphoria didn’t last for long. Someone damaged his beloved aircraft while moving it out of the packed hangar to get to his own plane. The repair took a lot of time, money and hard work, and Eckert swore to himself: “This won’t happen again.” So from now on he parked his SR20 in the very back of the hangar, where nobody would have to move it.

The problem was: While his aircraft was all safe and sound, it took him ages to take it out of the full hangar every time he wanted to use it. All the airplanes needed different tugs and tow bars – it was a nerve-stretching procedure. Therefore, Eckert had a clear conception of the tug he longed for. “I need something that gives me the possibility to walk around the airplane while moving it, so I don’t need anyone helping me”, thought Eckert, and even more important: “I need one tug that fits all kinds of aircrafts. That can’t be that hard to find, can it?” Turned out: It could. Eckert searched the market for equipment that would fit his criteria, only to be disappointed. Eventually, he came to the realization: “If I won’t build this tug, nobody will.”

Building the first Mototok from scratch

Eckert is a skilled aeromechanic and had also worked as a car mechanic in his youth. Although he worked in sales in the electronic and telecommunication industry since the 1970s, he still knew his craft. Eckert is anything but squeamish and a man of actions. That’s why he ordered some parts, started to tinker and eventually built the tug of his dreams – with his bare hands.

The Segway inspired him to use two wheels on the sides of the aircraft’s nose gear for easier maneuvering and stronger grip. The remote control was made from the joystick of an electric wheelchair. In 2003, after a lot of hard work, the first Mototok was finished: A mix of an already revolutionary concept and a DIY-seeming design. 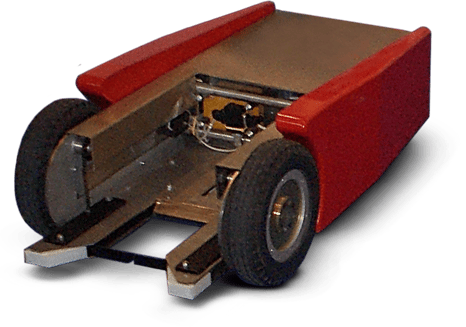 How an invention became a company

Thilo Wiers-Keiser met Kersten Eckert in the late 1980s. Back then, he had his own car radio store in Krefeld, Germany. Wiers-Keiser was a businessman to the core and Eckert and him found that they have a lot in common. They started working together, built a telecoms company in the 90s and sold it again in 2003. When Eckert approached him with his new invention and thought about starting a company, Wiers-Keiser didn’t hesitate to join in. Eckert’s technical know-how and Wiers-Keiser’s business skills made them the perfect team.

Initially, the tugs were called “carry boy” but the duo dreamed of a more mature brand. Wiers-Keiser played around with letters and terms until he ended up with a mix of “motor” and the initials of the founders: Mototok was born.

They registered a business, built a second Mototok model and went to aviation trade fairs in Germany. Their tugs for lightweight airplanes turned out to be way too expensive for the purpose – but there was a huge demand for tugs that could fit commercial airplanes. Potential customers demanded many different features, and Mototok started to develop tugs that would fit these needs. Demand, development, demand, development – the result of this flip-flopping were the Mototok models you know today: The M, the Twin, the Spacer, the Helimo. Today’s Mototoks base on more than 1000 requirements that customers made and keep making to this day.

In 2005, the first Mototok was sold, 2012 was the first year the company was in the black. Since then the story of Mototok has been an endless climb – and we aren’t thinking about settling for cruise altitude. What makes this company and its products so special is that they are constantly changing, adapting and improving. Innovation, rethinking: That’s what Eckert sees as Mototok’s actual mission. To galvanize the aviation industry and bring it forward – one pushback at a time.

Special orders, new challenges – these things are the engine of Mototok International. Completing seemingly impossible tasks is what drives us. If a solution to a problem doesn’t exist yet, we invent it. You have a hurdle you need to overcome? Contact us now for a free consultation!

Get the maximum out of your Hangar

Sign up for our blog and always stay up-to-date! 100% free and no spam.